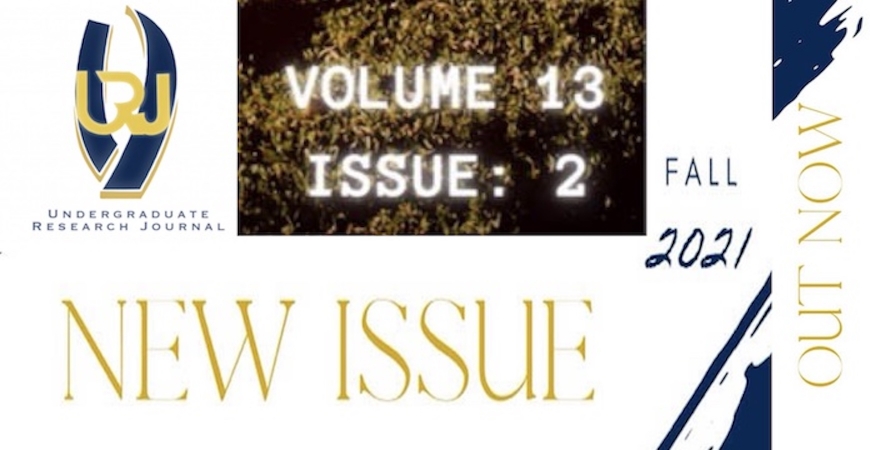 We are excited to announce that the new issue of the Undergraduate Research Journal has been published for the Fall 2021 semester (Volume 13, Issue 2).  Read the issue here: https://escholarship.org/uc/ucm_mwp_ucmurj

Humans have time and time again proved themselves to be authoritative creatures whether through risk-taking or ambition we have shown the world that we are a force to be reckoned with. We have continued to make decisions that inevitably create positive and negative consequences for ourselves, one of them notably being animal domestication. As we have evolved and changed, so has our relationship with animals. In Animals and Human Society: Changing Perspectives (1994) by Aubrey Manning and James Serpell as it was stated “The nature of our relationships with them and how they have been regarded has depended on how we human beings see ourselves and our place in the pattern of existence” (Manning & Serpell, 1994, p.xi). By re-examining of our relationship with animals and their development over time, we gain an apprehension about our issues with them and why the act of domestication must be...

Negotiations of Power: The Persistence of Indigenous Meanings of Space in Mission-era Alta California

Across all cultures, there is one shared medium through which humans exist: space.Space can be defined as the natural land that people live on, it is also constituted of the artificialstructures that we build on it. Interpretations of writings by the humanist geographer, Yi Fu Tuan,have described space as, “...a multiplicity of mental constructions which all rely on theinteraction between the human body and its environment” (Mahoudeau, 2016). It is the physicalrealm through which individuals live their lives in and through. It is through this exchange thatpeople are able to develop particular meanings of space including religious ideologies,sentiments of belonging, or even domination. Each of these examples are commonly displayedand dictates how and why people treat spaces differently and in turn, one another. As peoplebuild their emotional ties with an environment, they feel a sense of entitlement towards it...

AI Technology Ethics in Cognitive Science: A Review of the Literature

I will explore issues in the field of cognitive science, specifically ethical issuessurrounding cognitive science research that has malicious purposes and intent. To be moreprecise, how does police funding into artificial intelligence (AI) research fuel and reinforcestereotypes and attitudes towards communities of color?The purpose is to follow intentions for AI cognitive science research in policesurveillance and crime prevention. Bias against communities of color is maintained in AI systems which damages the lives of people of color. It is a significant ethical issue because AI is a relatively new technology previously adopted by police departments with negative implicationssuch as implicit bias from harmful stereotypes. (Maerowitz 2020) From there, we can analyze the intentions behind the financial resources and the uses ofthe research. This technology can change the very foundations of society, for good or bad. A review...

After the disbandment of racially restrictive covenants post 1948, Washington D.C. experiencedevents of “blockbusting”. These events influenced a racial turnover known as “white flight”.This study aims to analyze blockbusting by mapping migration and home sale patterns from1948 to 1971 within 8 blocks and a total of 454 lots in Petworth, Washington D.C. (census tract21.02). Using a thirteen-statement inquiry, housing deeds from the District of ColumbiaRecorder of Deeds were examined to capture migration and home sale patterns of blockbusting.59 out of 454 lots were sampled, with a total of 118 resales, which demonstrated that the sampleresembled similar migration and home sale patterns. Two real estate institutions, Ralph D CohnINC (RDCI) and Sindler Realty Corporation (SRC), appeared numerous times in the sample andwere investigated, which revealed historical archives, newspapers and lawsuits related...

Sexual Education and the LGBT+ Community: The Impact of Information Sources on Sexual Outcomes

Sexuality is a fundamental part of the human experience. Many individuals have their first sexual encounter as young adults; it is important for them to have access to accurate and relevant sexual information. Traditional sources of sexual education (school and parents) affect sexual outcomes (self-efficacy, sexual health, internalized homophobia) among LGBT+ individuals, compared to alternative sources of sexual education (friends, internet, pornography, apps, media, young adult fiction). Using a mixed-methods approach, twentythree LGBT+ individuals (ages 18-29) completed both a quantitative questionnaire and qualitative interview, which assessed what sources participants employed to learn about sex when growing up, as well as how this impacted current sexual outcomes (sexual health, sexual self-efficacy, internalized homophobia). Traditional sources seemed to do more harm than good, both marginally related...

An In-Depth Analysis of the Novel SARS-CoV-2

The COVID-19 outbreak, originating in China and spreading across the globe, has affected the entire world by taking the lives of millions and leaving millions more in hospital beds fighting for their lives. This infectious disease was considered a pandemic by the World Health Organization (WHO) in March of 2020, and since then has created an urgent response from world leaders and health organizations to develop an effective strategy to overcome this deadly disease and put an end to the pandemic. Several techniques have been developed by health organizations and vocalized by world leaders around the world which have all been helpful in the fight against COVID-19, however this article looks to address how living a healthy lifestyle might also be one of the most important techniques that should be implemented and vocalized in order to put an end to this novel virus. Research has shown that continuous physical activity and...

Peter C. Nowell’s research continues to help impact how biologist observe tumor cells withusing Darwin’s Theory of Evolution to help researchers better understand cancer cells and howwe can counter their effects on the human body such as chemotherapy and other methods ofeliminating them. With chemotherapy being the most known method of treatment, there isanother method that is much safer and recently left clinical trials called immunotherapy. Bydiscussing Nowell’s research we review clonal evolution in which he explains how tumor cellsare produced along with other researchers who have discussed the progression of tumor cells.With these studies explaining more how cancer cells work, will benefit future methods to deliverbetter and safer treatments for patients.

I Got My Attitude From My Mom: Behavioral Inheritance

The evolutionary principles of Mendelian inheritance and Darwinist natural selection arenot exclusive to morphological expression. On a baseline level, evolution can be most observableand understood through physical features. With recent studies, evolution has been applied topsychiatric disorders and natural behaviors. Through the peer review of different academicliterature, evolution has expanded beyond the physical sciences and into the frontier of the socialsciences. The biological characteristics of inheritance and natural selection still apply to inheritedmental illnesses and behaviors because individuals are more likely to inherit mental illnesses orbehaviors from their parents. The transgenerational inheritance of adaptations to environmentalstimuli is a result of epigenetics. This adds a nuanced layer to the nature versus nurture debate.The novelties presented in the field of behavioral epigenetics broaden the...

In the research article “Neurodevelopmental and psychosocial risk factors in serialkillers and mass murderers” by Allely et. al. (2014), the researchers explored the prevalenceof autistic spectrum disorder (ASD), head injuries, and psychosocial stressors in serial killersand mass murderers. They studied a sample size of 239 killers and organized the informationin data tables and statistics. Mass and serial killings are rare, which makes it hard to analysecases and earlier studies as they were not precise and lacked rigor (Allely et al, 2014). Thisarticle had limitations such as only having data from places in the United States and havingthe article available only in English. The strengths of the journal article were includingmultiple statistics and data tables to support their claims. The information provided in thisarticle can lead to further research on more neurodevelopmental and psychosocial disordersand childhood factors...

The URJ Staff would like to thank all the instructors who made this possible by encouraging your students to submit this semester.