Skip to content Skip to navigation
See our Campus Ready site for the most up to date information about instruction.Campus ReadyCOVID Help
The Karen Merritt Writing Program

Announcing the Winners of the 2021 Bobcat Creative Writing Contest 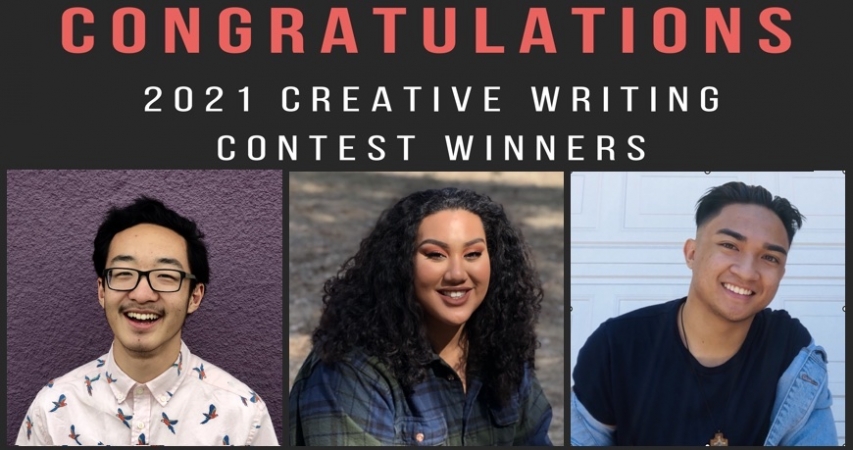 We are happy to announce the winners for the 2021 Creative Writing Contest. First, a huge THANK YOU to everyone who entered. Your work was carefully read and considered by our judges, and the high quality of this creative work made decisions very difficult.  Second, thank you to the first-round judges, members of the Creative Writing committee who read your work blind (with no names or identifying information attached). Ten pieces were chosen as finalists and passed on to our final judge, poet and essayist April Freely, who was very impressed by all of your work!

Zhijian (Jerry) Wang is from Temple City, California.  He is currently a first year CSE major who enjoys working with computers and playing video games.  Jerry took a creative writing class during his senior year of high school and has been writing for school since.  His entry is in the SCP style from the SCP Foundation which is an online creative urban fantasy writing website.  The SCP Foundation is a fiction top secret organization that aims to secure, contain, and protect the public from supernatural items and creatures.  These SCPs, like his own, are fictional entries of these items and creatures in a documentation style.

Sofia Alia Andom is from Hacienda Heights, California.  An English Major with a GASP Minor who is interested in acting, travelling, attending live concerts & theater shows, Sofia is very new to the genre of creative writing and hadn't had much interest in it until the beginning of the COVID-19 lockdown.  This precious time has allowed Andom to practice writing more intimately and to not be afraid of telling her truth.  As someone who considers themselves a minority - being a Filipino and Eritrean plus-sized woman, Sofia never truly felt there was a safe space for her voice to be heard, but was able to gain confidence not just as a writer but as an individual with with the support of professors, mentors, and friends.

Kyle Magro is San Jose, California. He is a second-year human biology major interested in minoring in creative writing. He's always been interested in writing poetry and short stories from a young age. Some of his favorite authors are Shane Koyczan, Ernest Hemingway, and Walt Whitman.  Originally, he wrote "Immigrant Boy" as a letter to himself, and it ended up being an ode to the children of immigrant parents. As Magro says, "the piece became a testament to the struggles we endure, and the dreams that our parents gave us."

CONGRATULATIONS to our winners!