Skip to content Skip to navigation
See our Campus Ready site for most up to date information about the fall semester.Campus ReadyCOVID Help
The Karen Merritt Writing Program 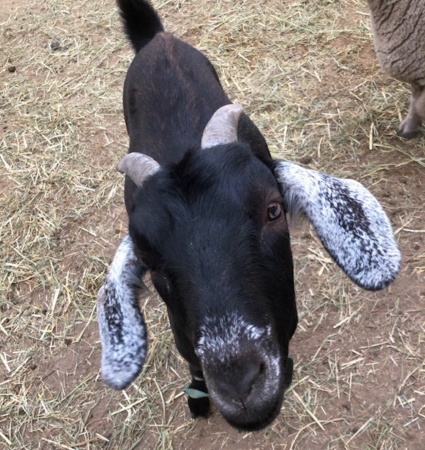 It all started with a goat.  The Creek Fire began on the evening of Sept. 4th in the mountain communities of Fresno and Madera. Within 24 hours, the fire had exploded to over 125,000 acres with 0% containment.

On Sunday, Sept. 6th, two days after the fire started, my neighbor and friend in downtown Fresno, Tammy Jackson, became concerned and alerted me. On Sept. 7th, Monday afternoon, she saw a post on a mountain community Facebook page from a resident in the evacuation zone who needed help evacuating a goat named Maggie, from the fire's path. Tammy told me she found someone on FaceBook to pick up the goat and more her to safety at the Double S ranch in Clovis. A few minutes later someone posted in the FaceBook group that they needed help evacuating their goats, and Tammy asked if I wanted to take that request.

I thought, it's Labor Day afternoon. Who do I even know who'd have a trailer, experience with goats, would drop everything to drive to the mountains, pick up two goats from someone they don't even know, and transport them to safety? I said, yes, of course. I remembered my UC Merced colleague and friend, Brigitte Bowers, a Continuing Lecturer with MWP, had experience with goats. She and her husband, Matt Loeffler, immediately hooked up a trailer in Merced, drove an hour up the hill toward the fire to pick up the goats, drove the goats to safety at a ranch in Fresno, and then drove back home to Merced. That one operation alone took five hours.

Within an hour, we were seeing and receiving dozens of requests to help evacuate horses, then lamas, then chickens, pigs, alpacas, geese, more horses, and on and on. Mind you, Tammy and I had never done anything like this before and knew little about livestock or animal rescue. Three days prior, I had just moved to Merced from downtown Fresno, and Tammy was moving to San Luis Obispo in a five days. But all we could think was, there's a fire, there are innocent animals in its path, owners are desperate for help, and we're sitting in the comfort of our homes, safe from the fire, we can do something. We dropped everything in our personal lives. And within 24 hours of operating we had a coordinated 24/7 effort of experienced horse folks with livestock trailers on standby outside the evacuation areas, a master list of transporters, and safe locations to move livestock and pets in the Fresno/Clovis area. Within minutes of someone posting for help, we were able to coordinate evacuations.

Within a week, our awesome crew of ten, that we pulled together overnight via Facebook groups, had evacuated hundreds of animals. We just wanted to help and were blown away by how this came together with the kindness of strangers stepping up, and the power of the Internet to do good. These folks donated their time night and day, took off from work, and used their own gas for this effort. And gas for horse trailers is expensive. We rescued 24/7 for a week, even in the middle of the night. We had very little sleep and thankfully colleagues from UC Merced (Lecturers with MWP) and friends brought us food and water. We had no idea what we were getting ourselves into.

One call was for 50 goats, another for 90 fowl. There was a mama dog named Pearl with seven pups, three who had fallen down a hole but are now recovered, a wild donkey named Kiko who loved to have her bum tickled but is stubborn as a mule, Myrtle the Turtle who just popped up, and a feral cat colony that wasn't having it, among countless other stories. The stories we heard from folks evacuating their animals were heartbreaking and intense. Life doesn’t stop for a disaster.

By September 14th, we evacuated every livestock/pet we heard of, out of the fire’s path. We are so proud of our selfless and brave crew. No matter the request, our crew was ready. Heck, I was waiting for a call from someone with a giraffe or a gorilla, and our team would have been right on it. We ended up calling our crew, Maggie the Goat.

Loretta Kennedy is a lecturer in the Merritt Writing Program. She has since joined the Board of Directors for the Central California Animal Disaster Team to help oversee future animal evacuation disaster efforts. She is currently seeking volunteers with social media, dispatch, database / project management, WordPress, and volunteer coordination skills to help plan and prepare for the next disaster. Contact Loretta Kennedy at lorettakennedy@gmail.com for more details please.